Wonder if I should start building the Ark...

Major League Sports Could Use a Fashion Advisor.

I'm not much of a sports fan. The only reason I know anything about football is because it caught my attention when the guys in black and white stripes started throwing around yellow handkerchiefs. It just didn't seem to fit their visual profile - I mean, red would have livened up that ensemble a lot more than yellow, but maybe they thought red was overdone? So I asked. And much to my chagrin, I now know something about football. Baseball has always been the easiest for me to follow. Maybe it was just exposure - it was definitely my family's sport of choice. And when I say sport of choice, I mean something that we watched or listened to with a cold drink in our collective hand. I don't mean any of us actually got out and played it with each other. We would have had to put the beer down, and that's really not going to happen with most of us. Unless there's a bottle of bourbon around somewhere. (This was all true until the anomaly that is my little brother came along. He can run in a straight line! While watching a ball somewhere! And NOT FALL DOWN.) The Professor is a Red Sox fan. I could care less. So I cheer for any team that wears red. Sometimes I'm even cheering for the right people. As long as I never cheer for the Yankees, I figure I'm safe. But the Braves fans that are on TV right now...they're not making my day. Sure, Boston's winning. 3-0. And the game's half over. But instead of booing the winning team, why don't you just encourage your own? It's no fun to sit and listen to over an hour of booing. Someone needs to tell those people over in Atlanta that when your team's losing, you've got an unshakable alibi for drinking to excess. So not only do I have to listen to these people screaming veiled obcenities, I also have to watch them waste the perfect opportunity to drink more beer than is advisable. I think I need to go shopping to get over this. Maybe I'll buy some yellow handkerchiefs.
Mused by Deborah at 11:06 AM 1 comment:

stashed in: Tirades Rants and Other Thoughts On My World

Thursday, I dragged the best friend up to Nashville for two days of fun. J, an old - ha! I called you old! - friend from the 7th grade just bought her first house. In our world, this not only mandates a party, it means that not to have one would mean punishment. So along with T&A (I'm going to call them that from now on. It makes them seem a little less dirty than they actually are), we planned a night. Luckily, we all know the entrance fee (some form of drinkable alcohol and an empty stomach) and the rules (remember something embarrassing about everyone, and liberally call each other names). As the BF and I headed north on Thursday afternoon, our latest alcohol inventory among the five of us was about 11 bottles of wine and one bottle of vodka. With a little rationing, we could make it through til the liquor stores opened on Friday morning. But even 5 hours of homemade pizza, wine, and laughing wasn't enough when - I think simultaneously - all five of us realized that in the next year we will all turn 30. More than one of us needed a drink refill. Some of us needed more than one. We all needed a subject change, so I think we moved on to discussing men at that point. That is so much more interesting - and much less painful to make fun of - than our age. Fortunately, I remembered that I had packed my camera. Unfortunately, I didn't remember until T&A had been gone for about 10 minutes. I thought about calling them back - but that would have wasted the energy I had saved up to finish the last bottle of open wine. I was still deciding on a plan of action when my head hit the pillow. Friday had far fewer hangovers than I anticipated. Not that any of us jumped out of bed ready to sing hymns of praise to the morning sun. But we don't ever want to do that anyway, so if one of the girls had acted in such a suspicious manner, I would have known they were hiding some good pills somewhere. We all made do with coffee, silence and some inspirational viewing of HGTV for a bit, then headed out to buy the plants and supplies we needed to do J's front lawn. Three hours, two Walmarts, one Home Depot and a liquor store later, we were back at J's house. First order of business: make the Pina Coladas. We took a vote after the first batch, and decided that all future ones shall be made with Mango flavored rum. After the second batch, we issued an edict, but I was pretty convinced that the Colada part of the equation could be left out, and I'd be happy with just the mango rum. Then it was time to get down to the nitty gritty. After which we rewarded ourselves with pasta and some more wine. So the girls and I had a chance to catch up. And - I have discovered - they all read my blog! Which is why I didn't pull out any of the embarrassing stories or pictures from our teenage years. We looked at all those pictures and we all admitted the bad hair mistakes we have made, bad hair mistakes that we all remember much more fondly than some of the bad man mistakes we've also made. I don't think it was verbalized, but I'm pretty sure more than one of us would rather live with the bad perm that interupted our lives than some of those men (I am, of course, excluding the Best Friend from this statement. I'm pretty sure she'd take a bad man over bad hair any day). We all agreed that good shoes trump just about everything else in life. Except good friends. And half price wine. J's New Flowers: 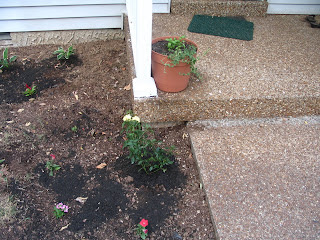 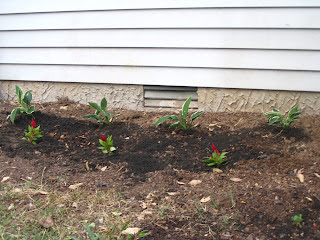 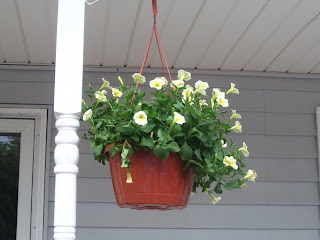 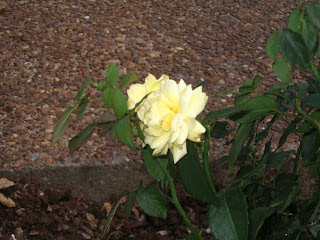 Priceless dinner conversations with my stepson and The Professor Me: Dinnertime! Boys come running. SS, piling up as much food as his plate will hold: What's for dinner? Me, eyeing his plate already full of the answer: Venison roast, potatoes, carrots and green beans SS, fork halfway to his mouth: Venison is gross. Me: You've never had it, so at least taste it before you puke. SS, after a few exploratory mouthfulls: Hey! It tastes like meat! Me: My sister's finally getting a dishwasher! TP, shovelling in roast and mashed potatoes: That's nice SS, with a scandalized look on his face: Finally? How have their dishes been getting cleaned? Me: with soap, water and her hands. SS: Oh, you mean it broke and she's getting it fixed? Me: No, I mean she hasn't had a dishwasher in about 5 years*, so she's been hand-washing dishes. SS: {scandalized silence, then sputtering} But...I mean..how does she DO that? *I was wrong; she's only been without one for 3 years. But right now my stepson thinks she's some kind of super-human for washing dishes BY HAND for that long, so I don't want to ruin the illusion that she has some kind of dish-washing super powers. If I think hard enough, I can turn this into a scare tactic and use it to my advantage.
Mused by Deborah at 11:58 AM No comments:

How to Ruin a Teenager's Life: A Manual

It's summer! And with that comes the joy of having my stepson. We don't get to spend a whole lot of uninterupted time with him during the school year because even on the weekends, he's busy with lacrosse practice, play practice or just the social life of a teenager. But during the summer, we actually get him for weeks at a time. The down side is that he's 16 and feeding him almost requires someone to get a second job. And...he's got the "unhappy with everything we do" syndrome that infects people of that age group. The up side? The joy that is my stepson. He doesn't find as much joy in this together time as I do, but it allows me a sustained period of time to play "Torture the Teen", one of my favorite games on this earth. According to him, these are the things that I did over the weekend to ensure that he is as miserable as possible. Because I love him that much. Feel free to use these and adapt them to your own home version of "Torture the Teen".

And he's only been here for 48 hours! I have six more days to think of ways to singlehandedly ruin his life for the summer. Why do I have a feeling that the above things will be remembered more than the chicken Parmesan I'm making specially for him (because it's his favorite meal)? Or the fact that I drove 15 miles out of my way to get the kind of lemonade mix that he prefers over the brands they sell at Walmart? Or the clothes he'll get. But that's ok. I'll probably remember the fun I had playing "Torture the Teen" a lot longer than I'll remember making pasta anyway.

Mused by Deborah at 9:49 AM No comments:

Appetizer Name something you think is “the best.” Tess of the D'Urbervilles is the best book, ever. It's got everything in it, and it always makes me cry at the end. Soup On a scale of 1 to 10 (with 10 highest), how stressed are you today? 1. I have no stress today. I don't believe in being stressed on Fridays, which is quite a stress-reliever. It's a wonderful feeling. Salad What kind of cleanser do you use to wash your face? Mary Kay daily cleanser stuff. I'm such a good sister that I force myself to buy this from my MK-selling sis to help her out. The fact that I love it is only a benefit. Main Course Tonight is a blue moon! What is something that you believe only happens “once in a blue moon.” I get to see my entire family in one place. We only have my stepson about 4 nights a month, and the chances of those four nights occurring on the same day that my parents, brothers and sisters all happen to be in the same location are almost nonexistent. I think it's happened twice in two and a half years- and once was at my wedding. Dessert When was the last time it rained where you live? On May 23, we got 0.21" of rain. Before that it was May 16 with 0.25". We've been on mandatory water restrictions for about two weeks, which means my veggies aren't getting the love and care they need.
Mused by Deborah at 11:05 AM No comments: