I’m becoming my father: A Pop Quiz (in run-on sentences)

When Person A says “the system won’t let me print the information” and I say “That’s ok, I just need to see it, not print it”, and I go into the system and click “display”, and the info most assuredly does NOT display, and Person A says {gleefully} “I told you that it won’t print!”, I will :

B) NOT IGNORE THIS OBVIOUS LACK OF UNDERSTANDING OF THE ENGLISH LANGUAGE, because it is IMPERATIVE that everyone know the difference between print and display. RIGHT NOW.

A) “Thanks, I’m sure I’ll find it”, while planning on calling and asking for directions later; or

B) “But you just said that the office is across base. Building 200 is next door. Which is it?” And NO MATTER WHAT they reply (because I need them to say they’re wrong at this point), I’ll say “But you just said…”

I have about 4 more examples of this, but I’m going to let it go.

Until tomorrow that is, when Person A/B tells me to go next door to print a report that won’t display. Then, we will have A LESSON IN THINKING ONE THING AND THEN NOT SAYING SOMETHING COMPLETELY DIFFERENT.

Mused by Deborah at 2:30 PM No comments:

Sidenote: If you sent The Professor and me a very beautiful rose, please let me know! It wasn't signed! A little over 13 months ago, we had what some wonderfully witty person titled the "Alabama Winter Storm Of The Century (So Far, Because I'm Going To Need A Better One)". That person has had her (*ahem*) wish fulfilled. Friday, appropriately, was a Very Stormy Day. We were under tornado watches, severe thunderstorm watches, TORNADO WARNINGS, flash flood warnings - you get the picture - all day. And night. The arriving Original Redhead from Tennessee complained around 8 PM that no one told her to bring an arc. And then, Sunday morning we woke up to snow.

We took a drive down to The Professor's University for lunch, and it was still coming down. The University is always pretty; in the snow, it's beautiful. 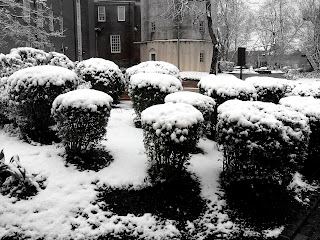 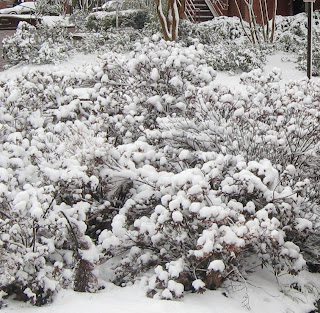 I loved this tree: 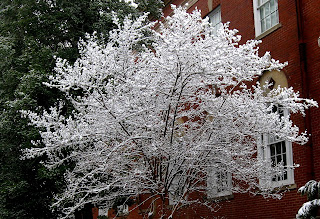 These were pretty too: 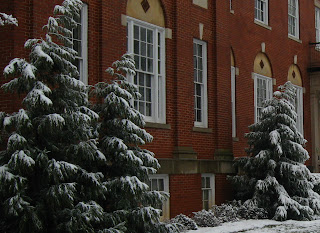 In the hour we were there, though, the sun came out; by the time we left, it was starting to melt. 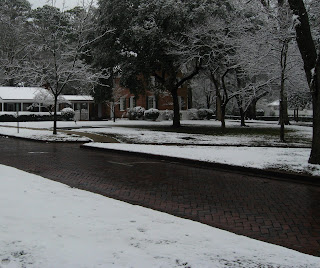 Still, there was plenty on the ground when we got home to try and whack The Professor in the butt with a snowball. I missed. But I was distracted by my target.
Mused by Deborah at 6:37 PM 1 comment: