I won another sweepstakes! Not a very big one at all this time, but I'm still happy. I got a $1 coupon for any Silk Soymilk product from the "Cows for Silk Sweepstakes". Since Hubby goes through a couple of containers of Silk a week, this has already been used. Even better - I used it on a double coupon day ($1 was the limit for the coupons). So I have one more thing to add to my list of wins for the year. Now, if only I could get first place in one of these travel sweepstakes I enter all the time... Update: The link to the sweepstakes rules is now defaulting back to the main page, which has no information on the sweeptstakes. Everything I can find lists the grand prize as a trip to a spa (there were four of those) and then 1000 people got coupons for a half gallon of silk. So I'm not sure how I got a $1 coupon...but hey, I'll take it!
Mused by Deborah at 3:50 PM 1 comment:

This morning as I sipped my 2nd 3rd 4th cup of coffee, I realized I needed to come up with something witty for my loyal readers. Problem is, the library hasn’t been funny lately (our students are – gasp! – only coming in to study), I haven’t seen my step-son in a couple of weeks (he’s always good for something sweet, yet humorous) and in the interest of my blood pressure, I’ve been trying to cut back on the political rants. So I was in a bit of a quandary. Until I found this:

How to poach Salmon in the Dishwasher

How in the world could I pass this up? The author promises that once you’re sure you’ve got the packets done correctly, you can even wash dishes while you cook!

I think I see salmon on our menu very shortly. I’ll have to change the sauce, a bit – we like sweet a little more than spicy. And I’ll have to come up with some way to get Hubby out of the house while I’m cooking. He will not be as excited about this recipe as I am. But he loves Salmon, and I think I feel a craving coming on… 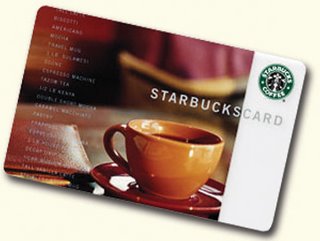 A couple of days ago I won a $15 Starbucks Gift Card from the The Coinstar® Skip Our Fee Instant Win Game & Sweepstakes. Don’t ask me how this could be an instant win, when I got the GC 2 months after the sweepstakes ended, because I’m not asking any such foolish questions. I’m taking the card and buying some coffee. Well, the next time I’m near a Starbucks anyway. Even more exciting: This is a sweepstakes that I won all on my own. I think everything I’ve won before (the TV, the $100 to Winn Dixie, the movie) all came for entries that my mom sent in with my name on them. Now, I am NOT complaining! (Mom, don’t stop sending my name in!). But there is a little extra added thrill from knowing that I did this all by myself. I may start singing the “I’m a big kid now” song any second.
Mused by Deborah at 7:57 AM 3 comments: 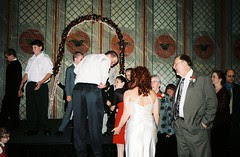 Getting Ready for a Family Photo Opp
Originally uploaded by lildebbie_77.

Well, I've finally gotten my lazy butt moving. 21 months later, I'm finally getting my pictures digitized. The pics were taken with 35 mm film, so I'm having the negatives put on CDs. Since it costs 75 cents per picture, I'm only doing a few at a time. I'll put them in this album as I get them done, and hopefully one day in the near future I'll have them all done.
Mused by Deborah at 7:46 PM 2 comments:

It's been a while

What I’ve been up to:

¨ A whole lotta nothin’. Really. I’ve been working hard at doing nothing. If you don’t believe me, just look at the archives for the past couple of weeks. Know what you’ll find? Nothin’

So, here are some random thoughts from around my world.

Remember the job that I was waiting to hear about? Well, it didn’t work out. I’m still in the same position I’ve been in for the past year. Which isn’t necessarily a bad thing – I love my job. But I was really looking forward to the flex-time. La Directora told me that we could revisit the decision in December. So there’s still a chance.

I bought my plane tickets to ! I also bought some for my hubby and StepSon. I’m just nice like that. We’re going the third week in March.

Is it the third week of March yet?

Speaking of StepSon, he is now a Sophomore in high school. I went and found his pics from the homecoming dance last year…and I swear, he’s an entirely different person. He’s grown about a half a foot, for one thing. And for another, his vocabulary has expanded. He now has a word other than *grunt* and “NO!” Just last Sunday, he said “food.”

Actually, he was quite talkative this past weekend. And when I hugged him…get ready….he patted me on the arm! I think I blacked out from the shock for a moment.

My parents’ 40th wedding anniversary is coming up. had better take a deep breath and hold on tight, cause all my brothers and sisters will be there, with a few spouses, a few kids and the random aunt, uncle and cousin thrown in for seasoning. In the meantime, I’ve decided something:

As people get older, they should be forced to give away things they vitally need so that their children have some clue as to what to get them for important events. Seriously. This would be so much easier if they needed a set of dishes or something.

{me calling sis} “Hey sis, mom and dad gave all their wine glasses to charity! I know exactly what they want for their Christmas present this year!”

Yes, I did just equate wine glasses with vital necessities.

Back to StepSon: he’s decided he wants to play Lacrosse. Please don’t ask me why, since, to my knowledge, the most athletic thing he’s done outside of PE in the past three years was achieve astonishing speeds at changing channels when he gets control of the remote. I’ve never seen channels be examined and discarded so quickly. But that’s not really the type of activity that gives you good experience at throwing balls around with butterfly nets. His first game is this weekend, and because I’m working Sunday I’m going to miss his very first match. I’m going to have to make him Chicken Parmesan next weekend to make up for it.

The husband hasn’t done anything exceedingly noteworthy. He’s as wonderful as always, but he’s behaved himself recently.

So what’s up with you?