Tribute to my Geekiness

I gave a presentation to the library staff yesterday on RSS stuff. I've been slowly trying to convince one or two librarians at a time that this is a good thing, and earlier this year our new site went up with a few feeds on it. So basically, it was time for everyone to pay attention to the fact that yes, the 21st century has started. I only had 20 minutes - and I knew there would be questions, so I had to keep it short. And I mean short. And one of our biggest and most popular databases (*cough* Ebsco *cough*) has the most convoluted way to use RSS feeds that I've ever seen. Explaining how to use that one feed took about 5 minutes with all the questions - and it sure didn't make it any easier to convince the librarians that have been around for 20+ years that this is something they need to learn. I could see the looks on their faces, clearly saying "I already get Ebsco email alerts, why is this even necessary?" So I hope by the time I showed them other, easier and more fun feeds, they were a little more into it. A couple of people told me that they went and immediately got a Bloglines account.
Now, I tried to be very careful not to hawk my love for Bloglines too loudly. I've tried out 5 or 6 different online readers, because I know that not everyone is going to love the one that I love, and I made sure that I mentioned alternatives to Bloglines a couple of times along with giving them a short list on the handout. I still felt like I was pushing a specific brand on them. But for the demo I was doing, I had to choose one. And since Bloglines is what I know the most about, that's the one that got used in the demo.
Anyway, I've gotten a few comments about the presentation. No one said it sucked (which is always encouraging) and a few people told me it went really well (even better).
My boss said "You were so...into it", which I took to mean that my geekiness was shining through at abnormally high levels.
Another librarian said "Are you always that dynamic in presentations?"  I really wanted to say it was all for her benefit, because this was the same librarian that told me an hour before the presentation that she would probably fall asleep and I shouldn't be insulted because "2:30 in the afternoon really isn't a good time for her".
Someone else just gave me a "Very Dramatic!" I haven't interpreted that one yet. Is dramatic good because that means it was entertaining (not what I was going for, but she didn't fall asleep so I'll take what I can get), or is dramatic bad because she couldn't fall asleep and that's what she wanted to do? This is not the same librarian who told me that 2:30 isn't a good time for her.
Thankfully, some people just said "that was very interesting" or "good job" so that I wouldn't have to spend what was left of my brain power on deciphering their hidden meanings.
I can only imagine how into it, dynamic and dramatic I would have been if I could have shown them the really cool things that you can do with RSS - I didn't even have time to touch on Flickr, or Farecast, or Pubsub ...

It's Not a Secret Anymore

I've been thinking about switching jobs. I wouldn't be leaving my library, just going to a completely different position in the same building. Until today, this was something I absolutely could not speak of in public. My prospective new boss swore me to secrecy around the library, forbidding me to even whisper the fact that he was so-unofficially-it-wasn't-even-official-enough-to-be-called-unofficially speaking to me of it. So over the past month I did a lot of thinking about it. I talked to one co-worker about it because 1.) I know who can keep their mouths shut around here and 2.) she's done the switch from front to back or vice versa. And then Friday, my Top-Secretive-Offer-Me-a-Job-Without-Really-Offering-Me-a-Job-Prospective-New-Boss talked to his boss (a real one) and told her that he had approached me about the whole thing, but that nothing was even close to official, we were just talking. Today, out of the blue, one of my bosses (a real one, this time) called me into his office and asked me about the fact that I was thinking of changing jobs. Apparently, the real bosses talk to each other (now who would have suspected that? :) ) He was very honest with me, and I was with him, and it was a really good conversation. So it's come down to decision time, here in the life of this happy librarian. I love my job in the reference department. Love it, love it, love it. Love talking to the students and most of the facutly/retirees (there are a couple of glaring exceptions), love working on the web site, love the periodicals, love the vast majority of the people that I work with (or at least, I tolerate them so well that they think that I love them, and that's just as good, right?), love, love, love, etc. I look forward to my job, I don't mind going to work (which is saying a lot, 'cause I'm a lazybones at heart). So why in the world would I switch? Because I want to do something completely different before I get totally rooted in one place. It happens with many librarians - they get in a job that they enjoy and they don't get out. They're happy there, and that's great. I want to do that one day too (mostly because it takes a lot of energy to learn a completely new job, and I think I already mentioned the lazybones side of me?). But before I get too lazy, I want to see the other side. The non-public service side. What a lot of people call the boring side. Boring? hmmm... I'll get to read lots of things - and get paid to do it. I read fast. I love the indexing that I already do, and getting to do it 8 hours a day may get old...but did I mention that I'll have spreadsheets to play with? Have I introduced you to my love of a good spreadsheet? My best friend tried to put me in therapy when I showed her the spreadsheet monstrosity that I made to organize my wedding. It was a thing of beauty. The finished product - completed the day of my wedding, as I checked things off - was color coded, cross referenced and subject sorted. If I had had a laptop at the time, I'm sure that I would have had it at the side of the actual ceremony in case I needed to check something. And then there's the flex-time. I'll get a lot more flexibility with my hours, which can only be a good thing. I miss being able to leave work a couple of hours early on a whim because I worked a little extra the week before. I'll get a boss that won't drive me batty (always a plus) and technicians that won't complain that my brand-spanking-new-state-of-the-art printer is pumping out toxic fumes (don't even let me get started on that one). I won't have to work weekends or nights. No more getting home from work at 11 PM only to turn around and leave again at 6:15 AM. And I know that I'll come back up front. I don't want to leave it forever - I just want to see how the other side lives for a little while. So I think I may be ready to try something new.
Mused by Deborah at 9:05 PM 2 comments:

(Umm...ok, so I thought I hit that "post" button a week ago on this. I just got on Blogger and found out that this is still in "edit" mode, which means that it's now a week old. Oh well - we can blame this on Blogger, right? I thought so. )


I think I have finally recovered from the 2006 Summer Week of Family Fun and Craziness, just in time to begin another year of Library Craziness and Student Fun. I'd like to say there was a highpoint, but it was all equally fun and equally crazy (kinda like the new academic year will be).

Big Sis Karen had a little conference to go to in , so she dropped her kids off up here with Big Sis Kathy for the week. For those of you that don't know, Kathy has 6 kids. Thus the equal parts crazy and fun (with a dash of lunacy and a side order of insane thrown in for good measure). After a few days I was exhausted - and I was only going over in the evenings. Actually, I think one of the most exhausting things is just keeping enough food going to feed all of those growing mouths. And one night, I took my Step-Son over for his dose of Family Fun and Craziness. Since he's 15, that's the equivalent of adding two 5 year old stomachs. But Kathy and I are a well oiled machine by this point at slapping food on plates and milk in cups (well, she's more well oiled then I am - but I make up for it by drinking more wine than she does. I think it all evens out in the end). 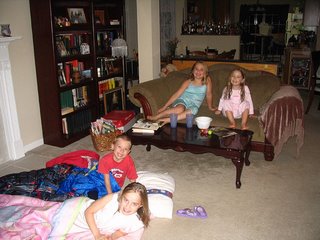 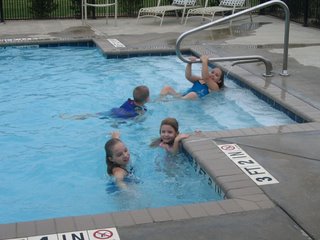 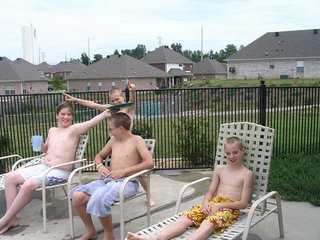 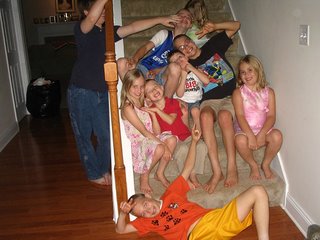 The highlight (in my book - and that's the one that counts, right?) was Friday night and Saturday morning. I took the four youngest kids to my house Friday night where we watched movies, ate popcorn and stayed up late being silly. Saturday morning, my brother in-law drove the four older boys over for a late morning edition of Pool Madness, followed by a round of Aunt Debbie Tries To Be A Well Oiled Machine All By Herself.

I think I had one of the best naps of my entire life that afternoon. Two solid hours of oblivion.

Saturday night I headed to to meet up with Karen and some online friends for a late night party, that ended up being even later when we left the party and went to the bar – which chose that exact moment to make last call. We only had time for one drink there, but never let it be said that we can’t be resourceful – we just grabbed some wine and beer and went outside and chatted for about an hour. So there, Marriott – we won’t let you ruin our Sister Fun!

Sunday night, back at The Ranch of Family Insanity, my Sis-in-Law from drove down with my other two nephews, which equaled what I believe to be an illegal amount of Family Fun. There has not yet been a scale created to measure the craziness that ensued that night - and none of us would have it any other way.
Well, the moms might disagree with that last statement.

And now I’m back to my regularly scheduled life of Star Trek every night at 7 PM. It’ll be fun for a few nights – but then I’ll be wishing my family were back in all their crazy glory. I guess I really am as Insane as the rest of them.