We picked the StepSon up at around 2 PM today for our holiday familiness. Because I am a Stepmother (definition: perpetually looking for ways to make children everywhere unhappy), I delayed most of the gift exchanging until after dinner so that StepSon would have to actually interact with us for a few hours before disappearing with his iTunes gift card to figure out what to spend it on. It was a risky maneuver - sometimes, it would probably be better for all of our relationships if we spent our family time in separate rooms. With a large house between us. And maybe a small country. But today, the Christmas spirit seemed to have taken hold of the teenage psyche and made wonderful miracles happen. Sure, he disappeared once an hour to call the girlfriend he hasn't seen in HALF A LIFETIME (translation: four days). And he ate all of the candy from his stocking before dinner. But then, after dinner when we exchanged presents, I realized I had only been punishing myself with the whole "let's spend time together first" rule. Because this Stepson of mine - who I will probably want to strangle at least twice in the next 72 hours - this wonderful teenager showed just how much he actually pays attention to me. Me, the Chief Torturer of his young and angst-ridden life. HE BOUGHT ME A BARRY MANILOW CD. It gets better. He bought me a CHRISTMAS Barry Manilow CD that I DIDN'T EVEN KNOW EXISTED. Of course now, as he and his dad play darts on his new electronic board, he's regretting the decision a little. I think I'm the only one enjoying the fact that Barry is louder than the annoying voice coming out of the dart board. Honestly, I love this CD just as much because I can't believe that he's paid enough attention to me over the years to know how much I would love it. And when he told me that he had seen a commercial for the CD and known I would love it, I may or may not have momentarily considered bursting into tears and throwing my arms around him. Instead, I did the next best thing that I could think of. I fed him dessert.
Mused by Deborah at 6:56 PM 1 comment:

This is one of the best Christmas stories I've read. This guy really is Santa. I want to be him when I grow up. With a smaller stomach. And less facial hair.

Terry Franz has been known as the Car Santa for more than a decade. Twelve years ago, he gave away six cars to people in need. This year, with the help of donations from local businesses, Franz has given away more than 300 cars in Kansas and Missouri. KMBC's Jana Corrie talked with one of the recipients, Connie Hanson, who said the car will change her life. "I don't have to walk to work in the snow anymore. It was getting really cold there for a while," Hanson said. Hanson has been living at Hope House, which is a shelter for abused women. She said the money she was saving for a car can now go to getting a place of her own. "It's one more step past the cycle, past the abuse. He can't take this from me," Hanson said. Corrie reported that the families who get a car also receive gas cards, car maintenance for a year and car seats for children. "I'm excited, just really excited," recipient Natasha Berned said. Berned said she now has a way to take her sick daughter to the doctor. "It's a miracle, it just couldn't have been better timing," Berned said. Franz said he feels good knowing that he gets to change the lives of hundreds of people every year. "I get the greatest job in the world," Franz said.

Mused by Deborah at 9:56 AM No comments:

He should have quit while he was ahead

My incredibly sweet and wonderfully thoughtful husband took his life in his hands and woke me this morning with a "Happy Anniversary" and a strand of black pearls. The black pearls are what kept me from killing him. Take a look: http://www.szul.com/products/36944/All-Natural-Black-Freshwater-Round-Pearl-Necklace-Strand-14K-White-Gold.html So, I get to work and look it up and find out that the traditional stone for 3rd anniversaries - at least according to the jewelry sellers up there in that link - is pearl. And I think "Awww…how sweet & romantic of him!" Then we had the following email exchange: Me: Oh my goodness! Did you know that the stone for 3rd anniversary's is Pearls? The Professor: Hopefully I’ll remember. Me: Remember what? Today is our 3rd anniversary. You got me pearls. YOU ALREADY TOOK CARE OF IT.
Mused by Deborah at 10:50 AM 1 comment:

Email conversations with my boss about people of genius

Boss: This person is brilliant: link to ebay auction Me: Oh my God. I can only dream of this kind of genius. I WANT TO BE THIS PERSON IN MY NEXT LIFE.
Mused by Deborah at 8:59 PM No comments:

Finally, I rate higher than my sister on Important Stuff

You're sensible and pragmatic, but also deeply romantic. You've got people-smarts and book smarts, and a fierce inner strength: behind that pleasant facade is a backbone of steel. That's why the Jane Austen heroine you most resemble is Anne Elliot, Austen's most well-rounded and mature heroine. You know your own mind, listen to the deepest yearnings of your heart, and know how to soothe others' ruffled feathers. You keep everything on budget and make sure no one feels left out. You see through the little flaws and foibles of those around you, knowing your friends and family sometimes better than they know themselves. And your wide range of interests---literature, music, travel---makes you an enchanting conversationalist. Luckily for your beau, once you give your heart, it's given forever. May he endeavor to deserve you. Ideal matches: Captain Wentworth, Mr. Darcy, Colonel Brandon, Mr. Bingley Guaranteed heartbreak: Edmund Bertram, John Thorpe, Mr. Collins Not worthy of your affections: Frank Churchill, Henry Tilney, George Wickham

Mused by Deborah at 8:49 PM No comments:

We got Sultan at the Humane Society 3 years ago this month. He's ... an interestingly neurotic sort. I could go on for days. He refuses to eat out of a metal bowl. He prefers to get his drinking water from the toilet. He does not know how to relax. He knows that someone out there is just waiting for him to put his guard down so they can steal his favorite toy. Except for the toilet thing, he is the perfect companion for The Professor. But none of that solves the problem at hand. My vet, when I first brought Sultan to him, convinced me that we had found a pure bred Bengal at the pound. Here's a picture of one from catcraze.com:

But then, about every other time we go to the vet, he asks "How's my favorite Ocicat doing?" An example of an Ocicat from the CFA website: 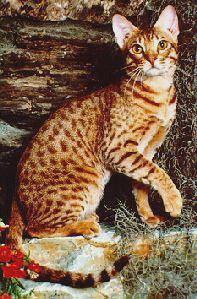 In the grand scheme of things, what kind of cat he is really doesn't matter. He'll be my overly-crazy, desperately-in-need-of-Prozac cat for the rest of his life. But this is the kind of thing I can spend entirely too much of my time trying to figure out by looking at picture after picture of cats online. Which inevitably leads to me looking at pictures of kittens. Which makes me want one. Luckily, I am a smart woman, and I realize that there is only room for either The Professor or a 3rd cat in the house. While the cat would eat a lot less, it wouldn't pay the mortgage for me. And I am a practical woman, as well. So, what do you think: Bengal or Ocicat? 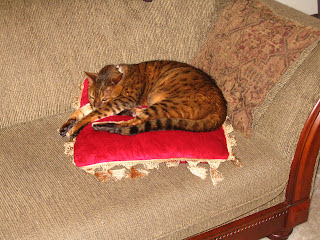 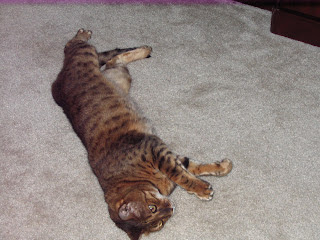 I might have to sleep in the kitchen tonight

If only to stare in wonder at this: 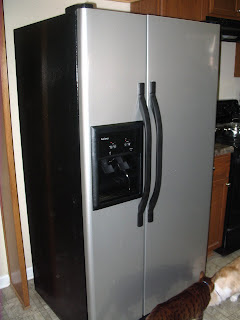 Look! Do you see the ice maker? An Ice Maker! I have finally entered the 21st century, my friends. 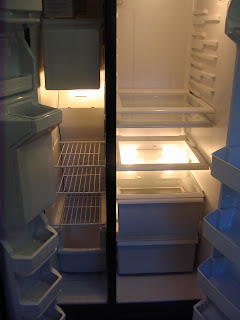 Mused by Deborah at 1:50 PM No comments:

Pearls of Wisdom from My Niece

"Dad doesn't eat healthy.
Sometimes he eats those popsicles.
They're sugary.
That's why he can't be strong like the Power Rangers"
Mused by Deborah at 7:33 AM No comments:

I went outside to put lights around the house this afternoon. I got The Professor to put down the papers he was swearing at grading and drag our big ole' wooden ladder outside. Then I had to remind him that he had to HOLD IT STILL every time I looked at it, because this ladder was probably built around the time the Titanic sank. And I'm beginning to thing that the humidity here in the south might do something to wooden ladders after almost 100 years. Anyway, after I had brought the lights, the little clippy things that hold the lights onto the gutters, The Professor and his ladder outside, we got underway. It went something like this: Yes, my lovelies, I am the reason that The Professor hyperventilates if he does not have a case of beer in the house at all times. Anyway, I decided that I should put lights on something. So I put them on the tree in my front yard. Which has never been a particularly lovely tree, but it's the only one that came with the house. I don't know what it is, other than perpetually half dead. But it has some branches - kind of - that will hold lights. And I convinced myself that in the dark, it would still look pretty. So I made The Professor drag the ladder over to the tree in the front yard while I hung lights. This is what a lot of love and a little beer gets me: 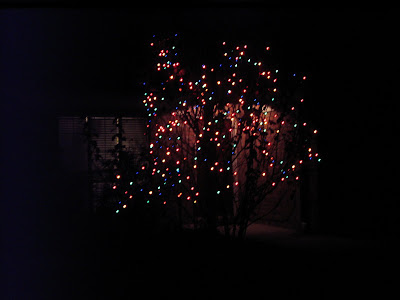